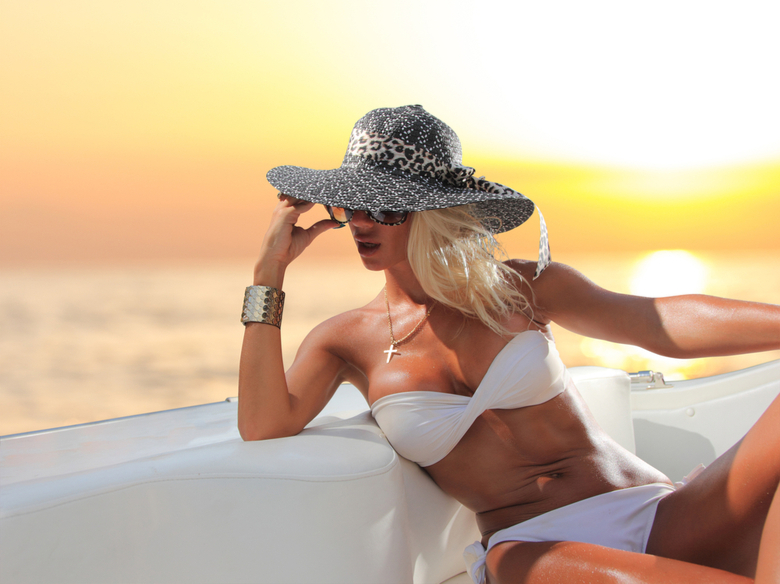 Emily reclined on her beach towel and soaked in the sun’s warmth.

It had been a few days since she took a break from work, and she was ready to enjoy some tranquil beach time. She unhooked her bikini top and rolled over onto her blue towel. Anyone who glanced at her knew she was topless, but she was sunning her back. Nothing more.  Relaxed, Emily dozed off until she woke, feeling the presence of someone.

Emily, forgetting she didn’t have on her bikini top, rolled over to face the man.

“Hi,” Emily said, trying to block the sun from her eyes while running her hands through her short, blond hair.

“Very nice tits,” he said. “I spotted you from my yacht.”

Emily tried to focus, but the sun was in her eyes. She grabbed her black sunglasses from her red bag.

“My yacht is nearby,” the man with silvery hair said. “I peeked through my binoculars and saw you. Well, to be honest, I first spotted your firm, beautiful ass.”

“Yes,” the man, dressed in conservative khaki shorts and a blue polo, said.

“And I have to say I like the front more than the back. Both, though, equally delicious. Would you like to join me on my yacht? By the way, my name is James.”

“I’m Emily. Sounds like fun. Let me just get myself together.”

Emily reached for her bikini top, slipping it on quickly and throwing on a white sheer kaftan. The man stood at the edge of the shore, looking out at the vast ocean.

“I’m ready for whatever adventure you have in mind,” Emily said.

James smiled. “Let’s go on my yacht and see what the afternoon bestows us.”

Emily and James walked toward the gigantic yacht, and Emily wondered what adventure awaited on the boat with its own swimming pool and a helipad.

“This is a beautiful,” Emily said.

“I’ve been lucky, even luckier today since I spotted you,” James said.

“Hey, let’s be honest,” Emily said, cutting to chase. “What am I really doing here?”

Eyeing her curiously, James said, “I think we both know what we want. What do you think?”

Seductively sashaying over to James, she untied her bikini top and slipping out of her bikini bottom, letting both fall on the yacht deck’s wooden floor. James’ green eyes studied Emily’s taut body and then let his eyes fall on her bald pussy.

“I think you should just relax in the chair over there and let me explore you,” he said.

Emily had zero qualms about this order as she strutted over to the reclining lounge chair, laid down, and spread her long legs.

“Go for it,” she said, challenging James.

James stripped quickly, and without reluctance, he slid his dick effortlessly into her wet, tight pussy, and they moved rhythmically in a seductive tango. Out of the corner of her, she was certain the passengers on the yacht docked next to James’ could see them fucking, but she didn’t care. James pounded her relentlessly like an out-of-control jackhammer.

“Good God, no,” Emily said, relishing every minute that his hard dick was inside of her. “Keep going.”

“How did I get so lucky to find you this afternoon?” James asked.

“Right time, right place,” Emily said. “By the way, I think your neighbours are watching us.”

Looking over his tanned shoulder, James glanced at the yacht next to his in the marina’s slip. A man and woman definitely watched them.

“Want to join us?” James yelled.

“Are you crazy?” Emily asked.

The couple smiled. “Sure,” the man yelled as they exited their boat and headed for James’ much larger one.

Emily didn’t even bother to move from her lounge chair. More fun straight ahead, she thought, as James greeted the guests.

“This is Yasmin and Brooks,” James said, introducing the couple to Emily. “And they definitely want to play.”

Seconds later, Yasmin and Brooks were naked, and Yasmin walked quickly toward Emily to kiss and straddled her with her long tanned legs. With her curvy ass in the air, Brooks took Yasmin from behind, fucking her while she licked Emily’s glistening pussy.

Brooks stared deeply into Emily’s eyes over Yasmin’s back. “I will fuck you,” he mouthed as he pounded Yasmin.

“I hope so,” Emily whispered to Brooks as she felt a deep and immediate connection to this gorgeous blond man.

James watched, but couldn’t restrain himself. Walking over to Emily, he teased her plump lips with his cock before she took him in her mouth. Yasmin flicked Emily’s clit until Emily quivered with an intense orgasm.

Her intense orgasm triggered James to lose control again, and he exploded in her mouth.

Brooks, though, was on a mission. Staring dead into Emily’s eyes, he pulled out of Yasmin, pushed her aside, and rammed his dick into Emily’s juicy, eager pussy.

Moaning, Emily bucked wildly as Brooks drove deep into her. James and Yasmin watched, mesmerised. Overcome with animalistic desire, Emily pulled Brooks closer into her, relishing every moment of a much unexpected afternoon.

9 Tips On How Fuck Buddies Can Successfully Keep It Casual